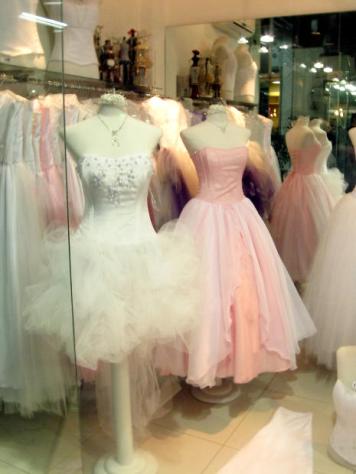 Once they knew Mara had permission to come to their wedding, Thad and Bailey also understood that Mara would need a dress to wear, so they made a date with her to go dress shopping.

When the day came to pick up Mara for the shopping trip, Thad and Bailey drove to her house only to learn that she and her family had been evicted. Bailey and Thad asked neighbors if they knew where the family had gone. One neighbor had heard the family had taken up residence in a tent on a farm, and gave them directions to the location. When they arrived at the farm, Mara and her family were no longer there.  They were told by the farmer that the children, Mara and her two younger siblings, had gone to the home of a shirt-tail relative and her boyfriend, who, seeing that the children were hungry, dirty and suffering,  kindly allowed the kids to stay with them in a duplex home on the edge of town. The farmer gave them general directions to the home of the couple.  This is where Thad and Bailey found Mara and her brother and sister. The parents had left the children there, and gone on their way. Mara, after all the  difficulties of moving from place to place,  was very happy and relieved  to see Bailey and Thad, and  glad they had been able to find her so they could go on the much anticipated clothes shopping date.

The shopping date fell on a hot, sunny day, and as they left the duplex Mara asked where they were going to go look for a dress.  “Houghton,” Bailey replied. Houghton is approximately 13 miles from Calumet. It has a small mall with a couple of department stores that would allow for some selection for Mara’s clothes.

Taken aback by her dismay, Thad quickly explained, “We don’t have to walk, Mara. We have a car, and the car has air conditioning.”

“You have a car?  And air conditioning?” As soon Mara understood that this trip was going to be comfortable, a look of relief filled her eyes. “OK! Let’s go!”

As they climbed into the car Bailey asked Mara if she was hungry. “Starving,” she answered. So the first stop was lunch at  McDonald’s.

After lunch came the trip to  JC Penney. Mara had never been to a retail clothing store before. Almost all of her clothes were from the Community Free Store in Calumet, so this was an exciting time, and Mara was in awe of everything she saw at Penneys.  The three eventually made their way to the dress department, which had a broad selection of clothing in Mara’s size. As Mara picked out dresses to try on,  Bailey became   puzzled over  Mara’s choices. None of the dresses she tried on were really suitable for a wedding.  Eventually Bailey  guessed that the reason Mara was so smitten with those particular dresses was that each one had an inexpensive decorative necklace attached to the collar – and jewelry was something that the little girl loved but didn’t own. Bailey confirmed with Mara that it was the necklace that she liked best about the dresses, then said, “Let’s find a different dress that will be nice  to wear to the wedding, and you can find a necklace to go with it, OK?” Mara agreed. They found a dress and necklace that pleased Bailey, Mara and Thad, too,  whose approval was sought by Mara when she came twirling out of the changing room as she tried on each dress.  A pair of new shoes completed the ensemble. The threesome then went to the check-out center to pay for the purchases.  When Mara saw the total cost of the items flash up on the cash register,  she was distraught.

“No you can’t do that,” she cried. “It’s too expensive!  I will put the necklace back!”

Thad and Bailey took Mara aside and quietly assured her that everything was fine, that they were very happy to purchase the items she had picked out and not to worry about the cost, which was not very much at all. It took some time to convince her, but eventually Mara was able to receive and enjoy the clothing that she would soon wear to the wedding.

As the wedding date came closer, Mara asked about the cake topper, and was curious to see a picture of it on the wedding cake. Bailey explained that there wasn’t anything to see yet because the cake was almost the last thing to be done for the wedding since it needed to be freshly baked and decorated for the big day. This answer seemed to satisfy Mara, but privately, Bailey wondered what solution Sheila had found for Mara’s gift of the 1970’s cake topper. Time was passing quickly. Mara had endured a lot of disappointments in her young life, and Bailey hoped the gift of the cake topper would not be another one.