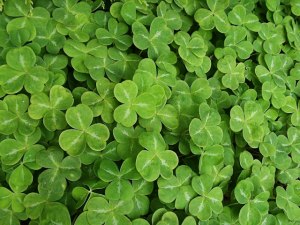 Erin go Bragh!, or, Ireland forever!
My great-grandmother’s family was from County Cork, Ireland, and although my heritage includes German, Norwegian, Scottish and Native American ancestors, I always thought of our family as Irish. Perhaps this was because we lived in a predominately Irish parish in Seattle, our parish priest being Fr Eagan. Also, the women who taught us at St John’s Elementary School were Sisters of Charity of the Blessed Virgin Mary, or BVM’s, whose order originated in Ireland. Plenty of Irish brogues to bless one’s hearing : )
St Patrick’s Day was always fun. At school, one had to wear something green, whether it was clothing, jewelry or hair barettes – to avoid being pinched. There we learned the reason for the day of celebration – of St Patrick, who was originally from Scotland and was taken to Ireland as a slave. He escaped, became a priest, and later returned to Ireland to share Christianity with the people there. What I recall most about his teaching was the way he used a three-leafed shamrock to explain the mystery of the Trinity.We also sang plenty of Irish songs, a favorite being McNamara’s Band. http://www.youtube.com/watch?v=9mPtOsvm7j8

Often on that day when we got home from school, Mom would have a traditional corned beef and cabbage dinner cooking for supper, and some elegant Irish tenor’s recording of  a sad balad blaring away on the hi-fi. Mom herself was not one bit Irish, but she joined in the fun and initiated many  Irish observances that we took part in every year in honor of the saint’s feast.
These days, since I have  married into a Finnish household, I have to make a point of celebrating St. Patrick’s Day: wearing green, putting a shamrock plant on the dining room table, tuning-in to a radio station that will play some Irish music and dancing a jig in the kitchen. I also send St Patrick’s Day greetings to many people – which now includes you!
Happy St Patrick’s Day!