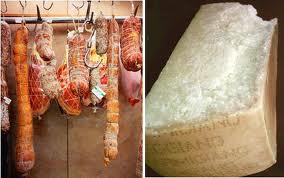 Just got home from a few days in North Dakota ( 7 hours away by car) at the DD’s in-laws. In-laws live on a ranch not too far from Bismark, and each year on the  day after Thanksgiving they and their extended family (including us this year) make sausage from beef, pork and venison meat. This year the total production of sausage – summer sausage, breakfast sausage, links,patties cold smoke, summer sausage and jerky – was 1,100 lbs. Yep.  This is an astonishing operation, which goes on for days, with four generations involved.  DH and I have heard about Sausage Making Day for over a decade, but had not attended until this year. I mean WOW. These folks are doing something right – something that anyone with half a brain should tune into. Somehow this family has turned hard, heavy, dirty work into fun-with-a-personality-and-a-purpose. I woke up in the middle of the night last night with a smile on my face because I realized what a marvelous thing I had been privileged to experience at Sausage Making Day.

Gotta tell ya, these folks KNOW what they are doing. This is the fourth generation to carry on the practice of sausage making: the secret recipes (if they share them with you, they have to kill you), the equipment, the space, and  the expertise are all in place. And  humor is there. So is the beer. I am basically a non-drinker, and can be pretty uneasy when there is a lot of booze around. But somehow, it fit in this situation. People, from retirees to pre-schoolers and every age in between, were working hard, and laughing hard.  Yes, the adults were drinking hard, but nothing got out of hand, and even though they were surprised that I didn’t drink, they weren’t offended.

Neither DH nor I had anything to offer the people with whom we were working  except the willingness to do anything that we were asked to do – and that was enough for them. We worked for about 10 hours that day (this was the second day of operations – the early birds had started after Thanksgiving dinner the day before), with a couple of  breaks for singing, dancing and eating  thrown in. Oh yes, and cards and other table games and underwear wedgies were going on, too. I would say there were 25 to 30 people gathered at the height of the sausage making – all family by blood or marriage – all working shoulder to shoulder and making the most of the day in every way.

I forgot to mention that with each batch of sausage that was made, there had to be some cooked up on the stove which everyone then tasted and commented upon: ” “GARLIC!” “Too much salt?” “Hey, is it legal to put jalapeños in German sausage?” At meal times, wonderful homemade food items appeared as if by magic. Amazing traditional German soups and main dishes, home canned pickles, and from-scratch pies, cakes and desserts were set out and scarfed up. Bottles were passed around, jokes were passed around, and lots of love was passed around, as well.

I was exhausted by the end of the night, but it was happy, productive exhaustion. For our efforts, we were given several pounds of the finished product to take home and enjoy eating over the next year. Oh, and great memories to make us smile in our sleep, too.

4 thoughts on “Does this blog entry smell like Liquid Smoke?”